PIFA | March 22, 2016
Three boys associated with Premier India Football Academy (PIFA) played for the AIFF Indian team at the AFC U 13 Festival held in Iran from 17th to 23rd May 2009.
Hussain Vahanvaty a PIFA student while Aryaman Seth and Calvin Lobo are PIFA campers.All three boys featured in the Maharashtra U-13 team that won the National Football Festival held in 2009 in Jamshedpur.
Maharashtra girl and PIFA student Natasha Merchant played for the India U-14 girls team that won the Asian Football Confederation (AFC) under-14 Girls’ Football Festival held at Sri Lanka from April 30 to May 5, 2009
Natasha was the only girl selected from Maharashtra. 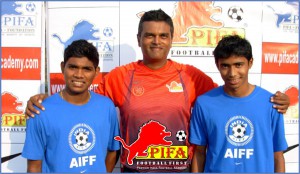 We are indeed proud to have 2 boys from PIFA CYFC –  Ajit Bhoir and Harshad Meher played for India.
The Indian team qualified for the AFC Championship qualifiers U-16 that was held in Saudi Arabia. They will play the finals round with 15 other Asian teams in Uzbekistan at the U-16 AFC Championship final held from October 4-19, 2008.
They were the only boys selected from Maharashtra.