The carnival was held on 26 February 2011 at Islam Gymkhana, Marine Drive, Mumbai 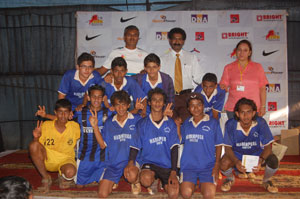 Over 800 kids participated in various contests such as a 5 a-side tournament, a Skills contest and a Freestyle contest. The Tournament consisted of two age groups; U-14 for boys and U-17 for boys and girls. The matches were played in a healthy and competitive spirit and officiated by quality referees. The ‘NIKE’ skills contest was divided into four zones; passing, shooting, dribbling and chipping. This tested the players’ true skill as their efforts were based on accuracy as well as time. Players with high scores won some exciting Nike goodies like shin guards, caps and t-shirts. There was also an entertaining Freestyle contest in which youngsters showed off their skills to rapturous applause from the watchingaudience. This contest hugely enhanced the entertainment factor as it brought an air of fun and excitement to the occasion. Prior to the carnival, hundreds of young kids took part in the online competitions such as ‘Design a PIFA Football kit’, ‘Create a Mascot’ and an essay on ‘India at the 2022 World cup’.The chief guest was Henry Menezes, CEO of WIFA.