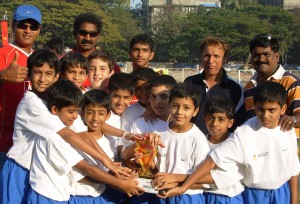 PIFA was invited to perform at the opening and closing ceremony of the MUPC finale held at the Cooperage Stadium in Mumbai by NIKE.

PIFA coaches conducted a special SAQ session at the opening ceremony with the captains and GK of the various U15 teams participating.

At the closing ceremony, PIFA students performed a football aerobic session during the half  of the finals.