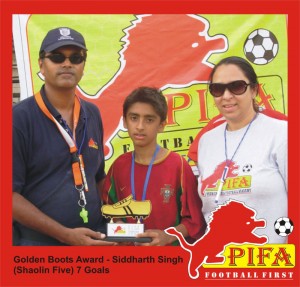 Children were invited to form teams of 5-6 players and give their team a funky name.  270 children participated form 30 schools. There were 17 Juniors boys tem, 4 girls team & 24 under 16 boys team. Seven referees from MDFA officiated the games.

The Golden Boot award was won by Siddharth Singh of Shaolin Five having scored 7 goals in the entire tournament.

The winners & runners up got a medal, and the winning team players got a Nike football each.

The event was organized for the sole purpose of keeping the children in touch with their game, as the football season had ended.

5 training session were held over a period of 5 months was held at the picturesque Priyadarshani Park at Nepeansea Road, Mumbai.  There were 5 categories Jr Girls, U9, U11, U14, and 14+.

Each session started with a warm up game, followed by technical training for an hour with use of specialized equipment, thereafter teams were drawn up. Each category played a mini league, a minimum of 4 games.  At the end of the day the team participants earned points.