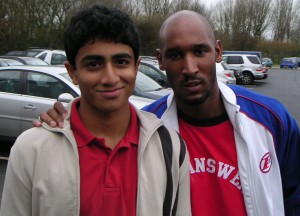 Winner of the Goa Camp – Anirugh Hattangadi was escorted by PIFA Director to Manchester for the BCSS World Skills Final on 26 November 2004.

He was taken to Manchester City Training Grounds, where he got to see the team train under manager Kevin Keegan and Stuart Pierce, ex-England player. He met Shawn Wright Philips, Anelka, GK James and other players. He was also given a tour of Old Trafford Stadium, home of Manchester United

after he participated in the BCSSA World Skill final, he was treated to a Bolton v/s Portsmouth EPL game.