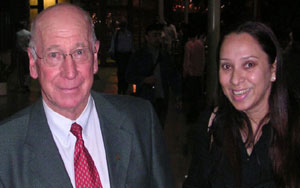 Sir Bobby Charlton on his recent visit to India and his meeting with Anjali Shah of PIFA, expressed his anxiety as to why India could not be a competitive football nation like our Chinese neighbors.

How can countries like India start doing well in football?

Football culture is non-existent in India. Your culture is cricket. But for a country of one million not to have a football team of some substance is strange. It’s the same with China. For India to start forcing themselves in football, they have to first do well in Asia Cup and Asian Games. Then only will they have the confidence to go forward.

It will be difficult, but India must buy the best football cultures. They have to buy the best coaches and best players to get the country excited about it. In a huge country like India all it takes is a spark. Just imagine if they qualify for the World Cup; just imagine. It will be fantastic.

The English Premier League is popular in India and is a huge potential market. How important is it for the game that the country does well in football?

Honestly, I look for Indian football. I look for football in China. But it is almost non-existent in the news. What would be good for football is India doing well, China doing well, the USA doing well. We need countries with population more than a billion to do well, because even if it starts small it will explode.