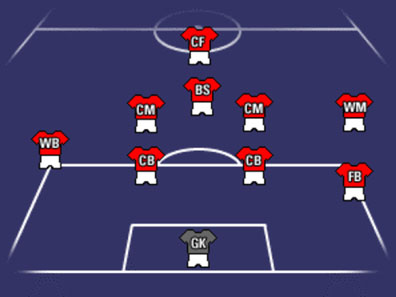 There’s no doubting it’s one of the most important jobs on the football pitch. You need agility and bravery to be a keeper. And lucky them – you can even handle the ball, but only in the penalty box!

It can get lonely between the sticks. You need to be always ready and alert for that crucial save – especially if you haven’t had much to do during the game.

Now that goalkeepers can’t pick up back-passes there is more emphasis on the control and kicking skills of a keeper. There’s no hiding place!

Good attacking football starts in the defense. There’s no better feeling than that sliding block. Or chasing after that striker and nicking the ball off their toes.

Scoring is important but your coach will be just as happy to see you stopping a goal. Full-backs have quite a varied role and play on either side of the defense. Their main job is to prevent the opposition attack in wide areas and to support the central defenders. They play an important role in supporting their team’s own attack by pushing forward to supply crosses.

So you know what to say next time you hear a striker telling you they’ve got the best job!

A wonderful sight in the game is seeing the wing-back fly up and down the touchline terrorizing the opposition. Their role is more attacking than the full-back, and it basically involves a great deal of running. They’ll certainly have finely tuned engines! But they are a nightmare to defend against. You never know where they’re going to be!

They are usually employed in a formation that includes just three players in midfield. This allows the wing-backs to supply all of the width in the team. Because their job is to attack, there will usually be an extra central defender to give more defensive cover.

To be a useful wing-back you’ve got to be good at all parts of the game! Fit, strong, good with both feet, a great tackler, an amazing passer and a fine crosser of the ball.

The Centre Back (CB)

Being at the centre of defence puts you up against the opposition’s centre forwards. It’s a wonderful challenge though. You’ll have to be a good tackler and strong in the air.

But the ability to read the game by spotting where the likely danger will come from is the biggest asset. Central defenders need to be very committed and focused on their role. If you let the opposition striker get in front of you then it can easily result in a goal against your side. And if that happens too often then your name may not be appearing on the team sheet the following week!

You cannot relax for one second – there’s danger on that football field from every possible angle. Where are the strikers going? Which midfielders are bursting through? And when your keeper’s got the ball, should you make yourself available for the easy pass?

This is a very specialised position. And you’re more likely to see it in continental football than in Britain.

Their job is mainly to play behind the defense to add extra security and improve the passing out of defense. They must be able to read the game well. And also be calm and confident enough with the ball at their feet to carry it forward and support the midfield.

So no broomsticks required to be a good sweeper! Just a good set of eyes, a fine footballing brain and two good feet!

No doubt about it. Playing in the centre of midfield is crucial to a team’s success. The best clubs in the country all have world class players in this position.

They are described as the engines of the team. You have to have stamina by the bagful to play in this position. It involves endless running. You will need to be a strong tackler to win the ball back and the skill to create opportunities for the strikers ahead of you.

A lot of your work will go unnoticed as you will make forward runs to join your attackers. But so too will your opposite number and you must match those runs to assist your defence.

It’s in the centre of midfield that games are often won or lost, so dominating the opposition in this area could result in three points.

Wingers, wide midfielders, call them what you like, they are some of the most exciting players around. It’s a varied job though. It’s not just showing off a few tricks and letting the defenders clean up behind you.

Energy and stamina are needed to give defensive cover to the full-backs playing behind you. And then when you’ve got your breath back, you’ll be expected to fly down the wing to create the chances for your strikers.

Playing right out on the touchline when your team are in possession gives greater space and options. Then when your team lose possession you should tuck infield. This gets you closer to your central midfield colleagues and help provide a greater barrier to the opposition.

Behind the striker (BS)

The player tucked in just behind the striker could be tagged as someone who has a “licence to roam.” But it’s a vital role and seen increasingly in football – especially at international level.

It is where a player is dropped into the area between the opposition midfield and defence giving them more time and space on the ball. It is very difficult to mark this player because they can be playing quite deep one minute and then burst forward and link up with the striker. They’ll be very comfortable on the ball, have great vision of what is happening around them and have a very quick turn of pace. Many scoring chances are created from this position but they’ll also be banging in a few goals themselves.

Scoring goals is beautiful. The feeling of hitting the back of the net is just amazing. But being a striker means you may take a bit of a battering from opposition defenders. Particularly if you’re any good.

There are all sorts of different characteristics that a good striker will have.

Most of the top strikers in the world are selfish in front of the goal.

So if you get a chance to get a shot in on goal, take it!